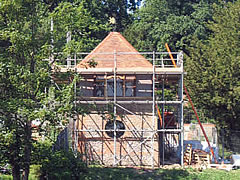 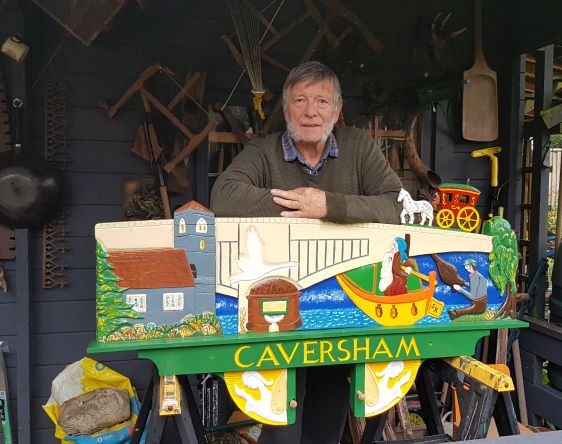 Stuart King, who carved the sign has repaired and repainted it. The sign commemorates the Golden Jubilee of H M Queen Elizabeth II, in 2002 and was designed and commissioned by CADRA . To find out more about the sign read: The Caversham Village Sign 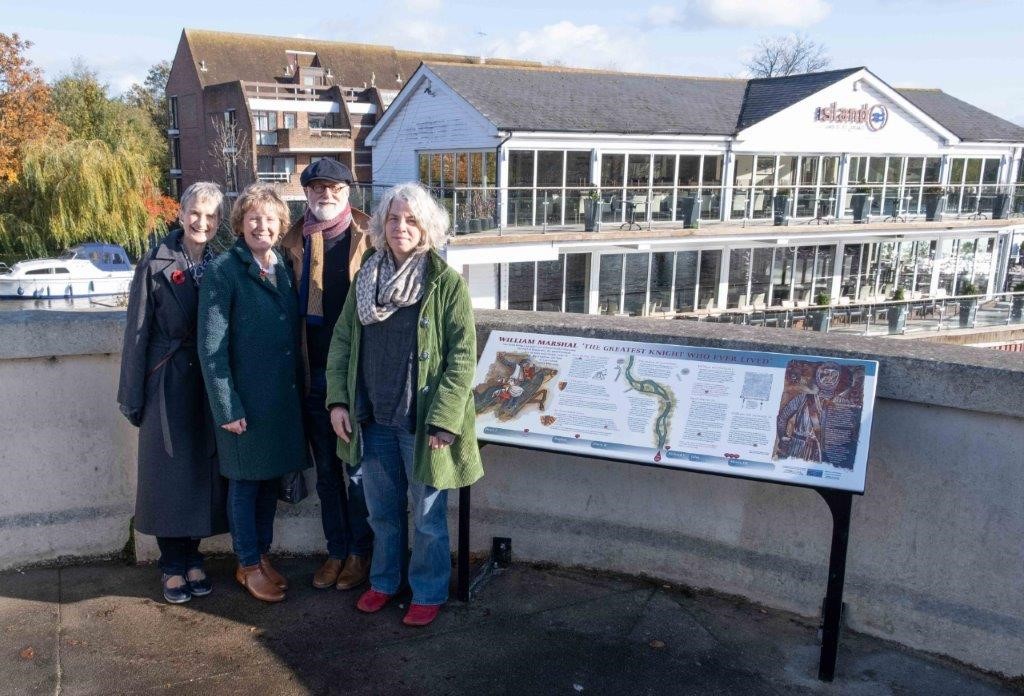 On Thursday 7 November, assisted by children from Marshal House at the Heights Primary School, the team who developed the panel removed the protective wrapping. A celebration to thank everyone who supported the project was held on the 26th November, attended by local councillors and the deputy mayor, who joined in the cake cutting. 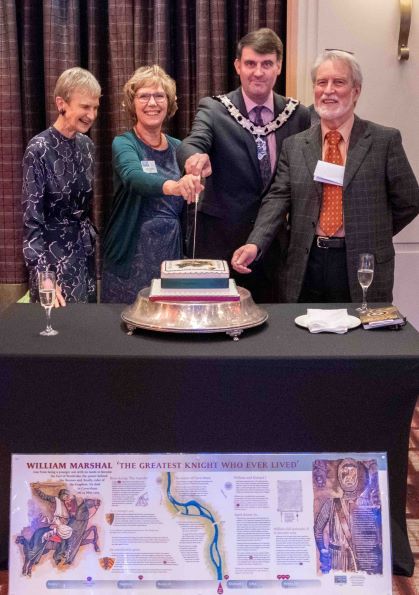 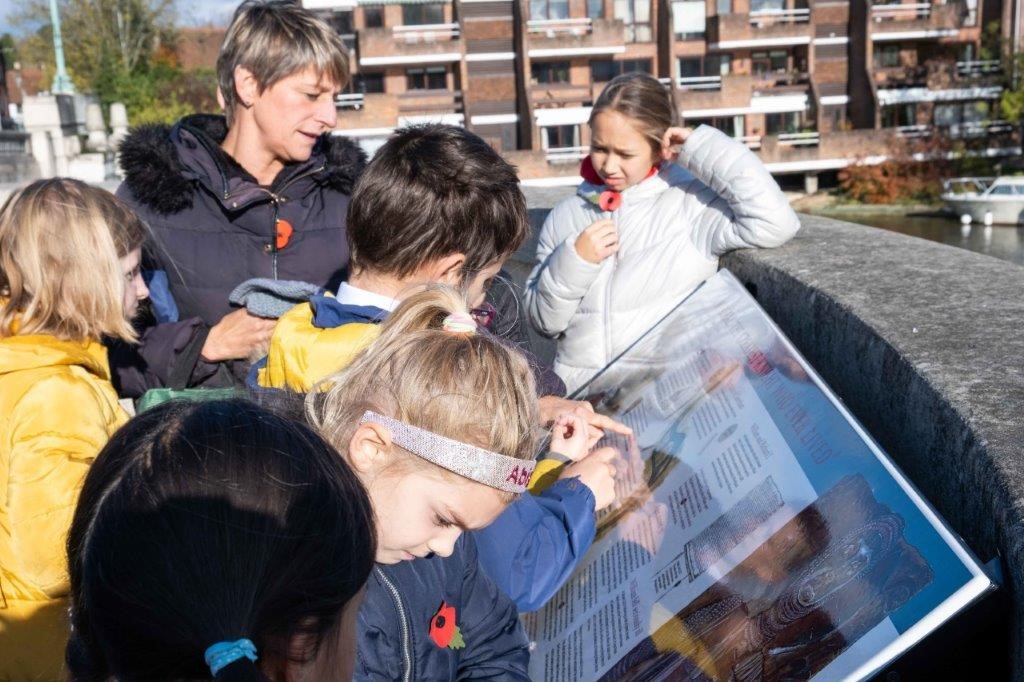 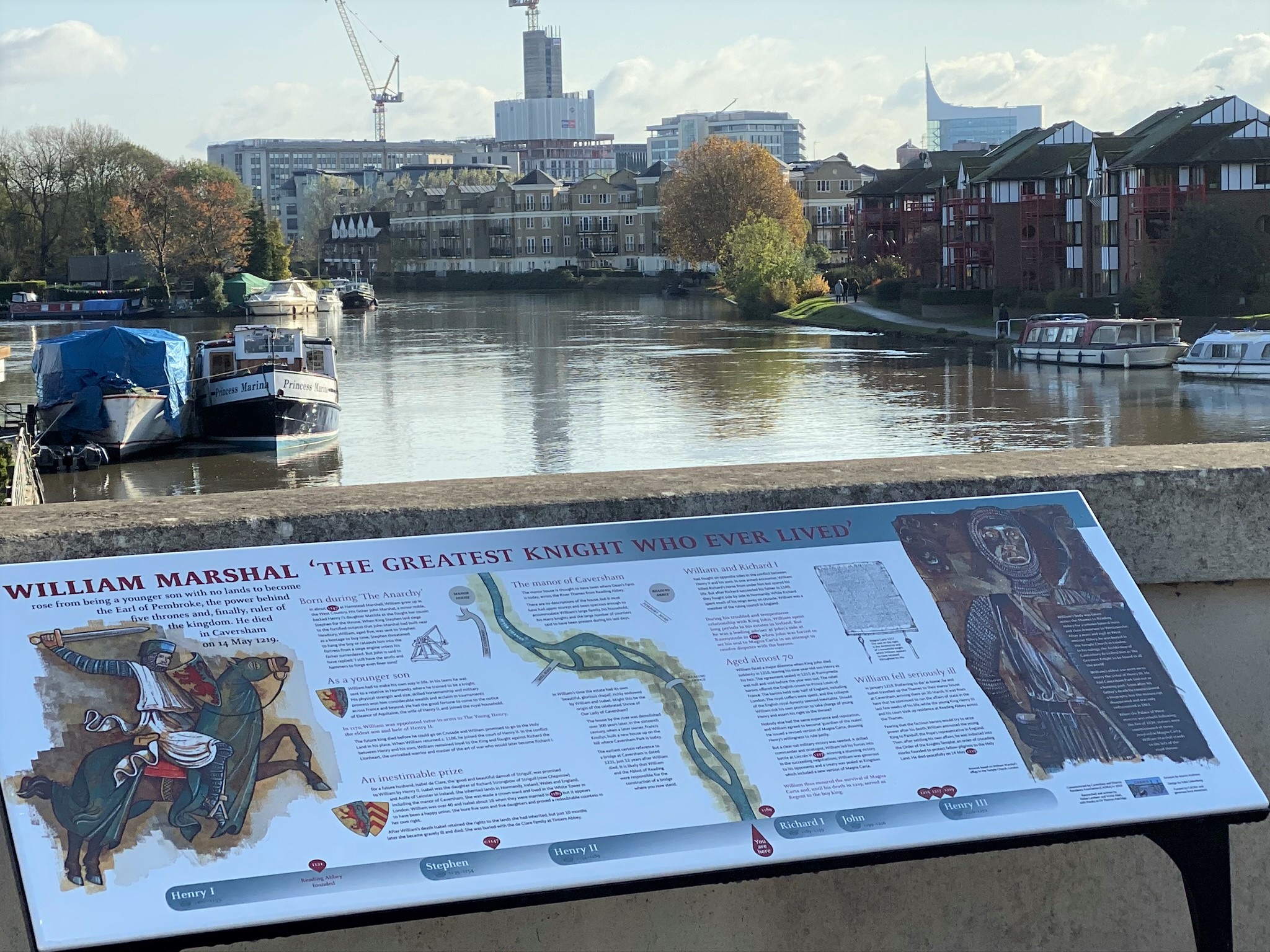 This richly illustrated panel, developed by CADRA, tells the story of William Marshal, who died in Caversham 800 years ago on the 14th May 1219.

He was one of the most influential figures in Medieval England and was lauded as the Greatest Knight who ever lived.

The panel is on the Caversham Bridge viewing platform, looking towards Deans Farm, where his home was thought to be and Reading Abbey, where his body was taken for a mass, before his burial at Temple Church, London. Artwork is by Martin Andrews and design by Anke Ueberberg. Dr Thomas Asbridge advised on the text.

Planning permission was granted and the order was placed in September.  A tailor-made frame was manufactured to support the panel and avoid placing strain on the 100-year-old structure of the bridge.

Reading Civic Society (a registered charity) kindly agreed to receive donations and apply for Gift Aid for the project. Generous donations, combined with gift aid and money set aside by CADRA, covered the project costs, exceeding £5000. 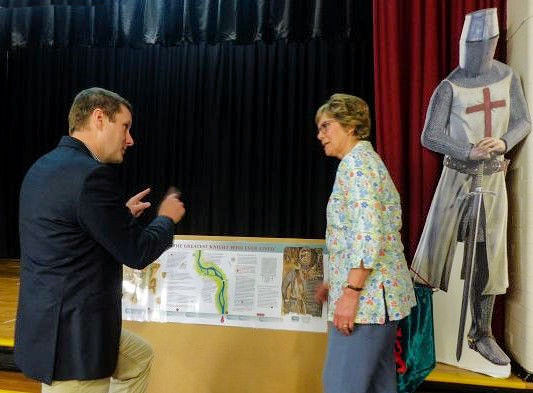 Dr Thomas Asbridge(See Picture) from Queen Mary University of London spoke to a full hall at the CADRA AGM on 11 June 2019 . Tom is the author of the well-respected book, “The Greatest Knight”. He is an internationally

renowned expert on the history of the Middle Ages and brought to life the extraordinary story. He described the essential attributes of good fortune, resilience and mental strength, martial prowess, military skill, cunning and loyalty to the Angevin line.

You may also like to watch the William Marshal BBC documentary, which is presented by Thomas Asbridge. 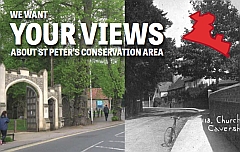 Following  work between the Council and a number of voluntary groups, the new voluntary Reading Conservation Area Advisory Committee was formed in 2016. A number of the CADRA committee are also members of the CAAC, providing support on local issues including review of existing Conservation Areas and advice on Heritage issues for both the Local Plan and individual planning applications. Following an extensive piece of work, the report on St Peters Conservation Area was completed in November 2018 with the adoption of this Revised Appraisal.  This also provides a model for work on the remaining 14 areas across Reading. Read more at: Conservation Areas 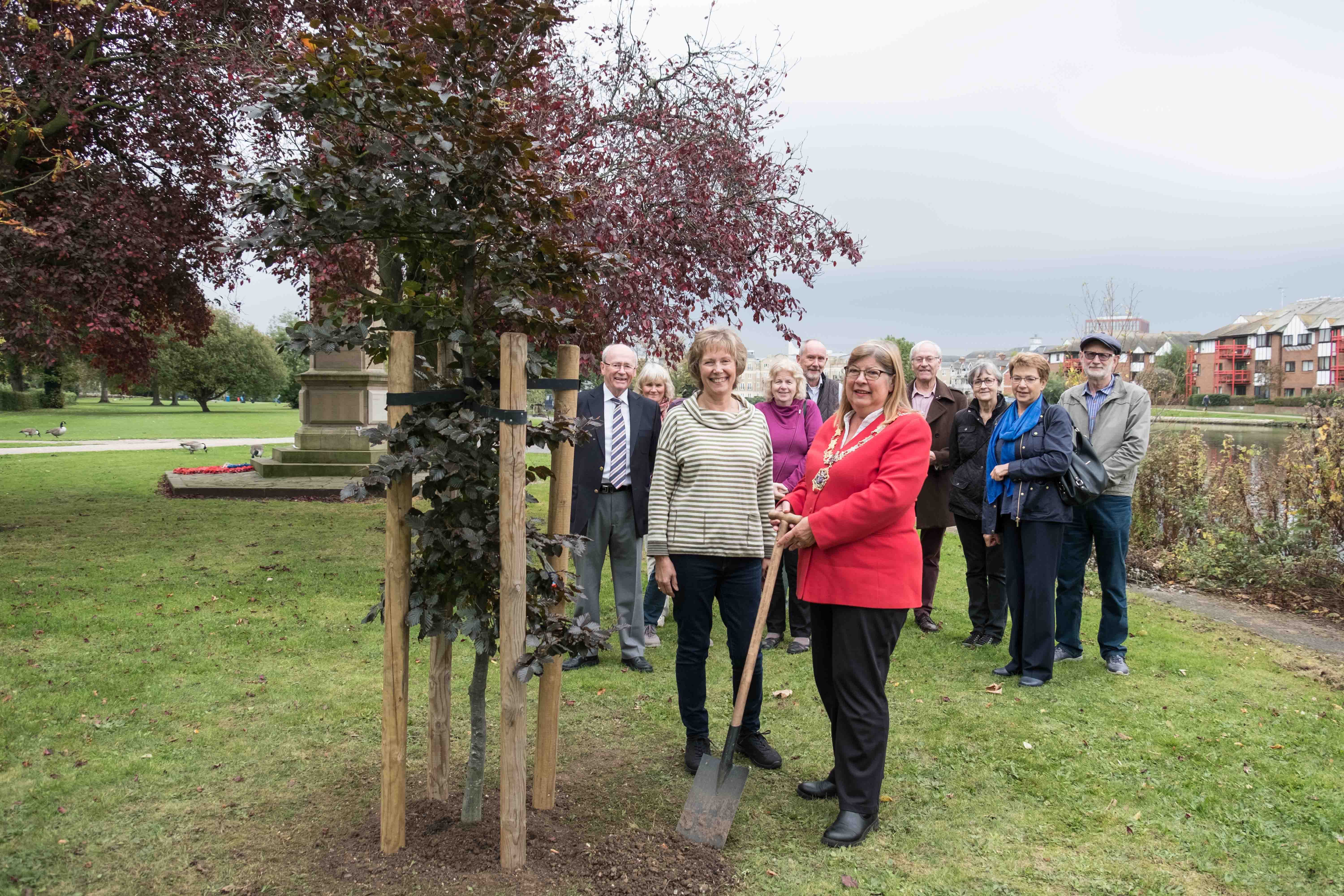 In 2017, CADRA marked 50 years since the association first started with a series of talks on 'What makes Caversham special', a special edition of the newsletter looking back over 50 years (Anniversary Newsletter), planting of a copper beech tree near the Caversham War Memorial and a celebration with members to toast 'the team past and present' and the 'next 50 years. 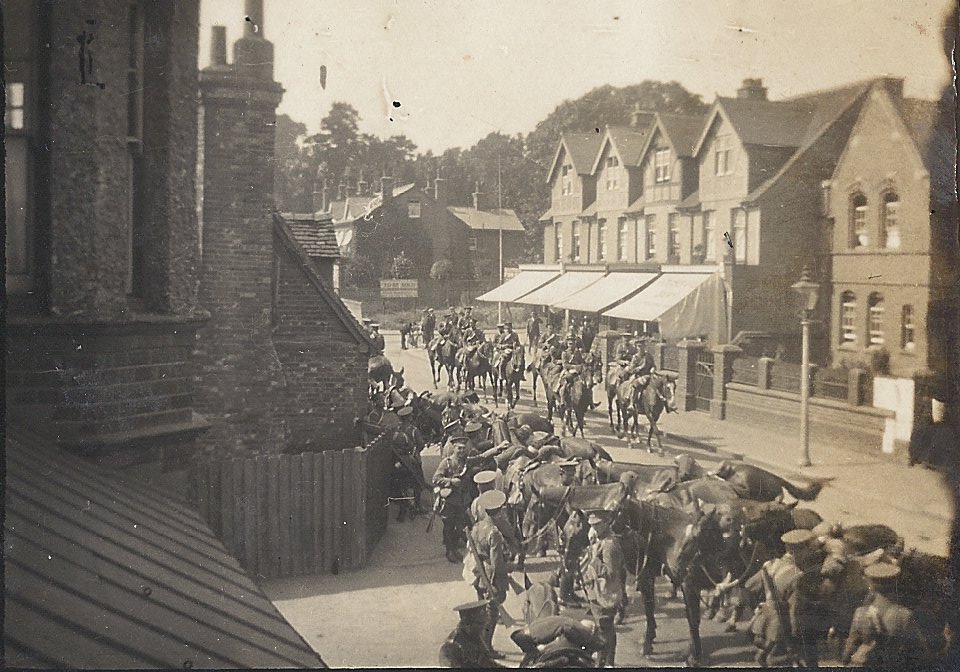 Building on the work from 'Caversham 100 Years On', CADRA compiled an exhibition for display in Caversham Library throughout August 2014. This is in three sections (all pdfs are ©CADRA 2014):

In November 2013, CADRA held a joint meeting with the Caversham Traders Association to open discussion on what might be done in Caversham to make roads more ‘friendly’ to non-motorists. From there, the ‘Sharing our Streets’ project has progressed, engaging local people and Reading Borough Council in how a proper strategy could be achieved, which uses more up to date methods to allow traffic to flow through smoothly and pedestrians to move around more freely. Work continues in preparation for funds becoming available from development in Caversham centre.

Read more at: Sharing Our Streets 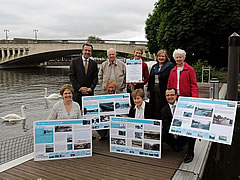 A project to celebrate Caversham’s rich local heritage during the centenary year of the boundary change in 1911.

This was set up and managed by CADRA, working jointly with the Friends of Caversham Court Gardens and the Rotary Club of Caversham with support from Reading Borough Council.

More information can be found at: Local History

CADRA played a leading role in: 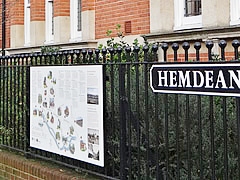 The Heritage Map was installed in January 2013. The leaflet is on sale in Caversham Library or can be viewed online here

2007 Caversham Past, Present and Future 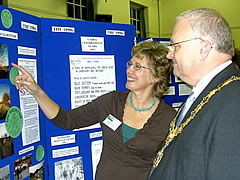 An exhibition to mark 40 years since the formation of CADRA in 1967 and to bring together different organisations working for Caversham.

Ruby Anniversary Edition newsletter
featuring an account of some of the changes and CADRA’s campaigns over the past forty years. 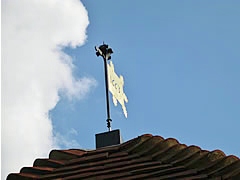 Commissioned jointly by CADRA and Reading Civic Society and funded by their members, to commemorate the work of the late Molly Casey, founder member and Life President of CADRA.

Ruby Anniversary Edition newsletter
which includes an account of the dedication service of the Wind Vane. 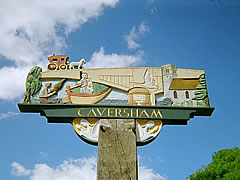 Designed and commissioned by CADRA to commemorate the Golden Jubilee of H M Queen Elizabeth II, in 2002.

The Caversham Sign was carved by Stuart King and there is more about him on his website.